No Bones About It

The Eden Magnet published an article on 24th June 2015 about human bones that had been unearthed on land where three generations of my family once lived.

There was speculation locally and amongst my family about whose remains they were and how they got there. Did my grandparents or great-grandparents know about them? Was it an unsolved murder? Apparently there were bottles and jars dating back to the 1950’s near the site where the bones were found.

I just knew in my bones (sic), before it was announced, that they were the skeletal remains of an Aboriginal person. Read about it here: Aboriginal Bones Found Near Eden.

Thankfully, I found out this morning from my cousin that almost the entire skeletal remains of this man have now been found.

The intervening two weeks have been like an emotional roller-coaster for me. I spent days down in the nature-sown forest on my farm, snipping back brambles and pruning the alder trees to let in more light for the emerging ash saplings. There I could let images of my homeland come to mind more clearly, knowing men from the Eden Local Aboriginal Land Council (ELALC) were sifting through soil while I worked away on the other side of the earth hoping that the rest of the remains would be found.

And then they were. Read about it here: More Ancestral Bones Unearthed

Here’s a small extract from my ‘back story’, that I wrote a couple of years ago. It’s an exploration really. It’s called: ‘On Being White Australian”:

“I didn’t see any Aboriginal people in the towns or in the bush or on the beaches where I often walked as a child. But I thought about them a lot. I thought about them especially when I was walking through the bush alone or along my Nana’s empty beach in the winter time. In my mind’s eye the bush and shorelines, the wild river beds and the rocks, the hillsides and valleys were teaming with Aboriginal people. The landscape seemed to hold the memory of them and present their past to me like a motion picture.

I imagined I could see smoke from their camp fires in the distant blue haze of the eucalyptus forest. I would sometimes think that I caught just the slightest wisp of the sound of their voices or some child’s laughter when I took off my shoes to cross the creek on the way to my Nana’s house. I pictured the young hunter crouched on the rocks with spear suspended, waiting for fish, – the sun glistening off his shiny black skin, – his wide set eyes fixed on the shallow water at the mouth of the creek.

I touched the thick, stringy bark of the oldest tree on the way down our hill and wondered if Aboriginal hands had at one time used that tree to break their slide down the steep slope, as I now did. Sometimes in the summer I would pretend that bare footprints along the sand were left by some Aboriginal people, who I just missed by a few minutes. I longed for them. And I longed for the truth about where they all went and why they left. It made me feel dull with regret and sticky with shame.

So as a child I knew in my heart of hearts that the land was theirs really, not ours. They belonged on this land, but they were nowhere to be seen.” 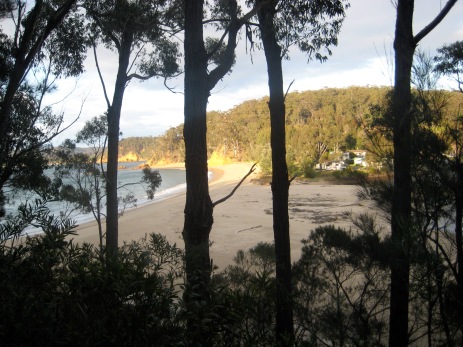 The remains were found just back from where the sun is hitting the beach. Photo taken from where our house was, up on the hill above ‘my Nana’s’ beach.

So much has changed in that regard since I grew up out there. The information I hungered for is now readily available. And now, (imagine!) there is such a thing as the Eden Local Aboriginal Land Council.

My cousins tell me how well this whole event of finding and rehoming the remains has been handled by everyone. There will be a plaque erected on the site of where this man’s remains were found. We now know this land is part of the Bundian Way. He couldn’t have chosen a more beautiful place to be buried. Now his remains have been moved, we don’t know yet how many years after his death. But they’ve been cared for by his decedents who know their culture and their Dreaming. That must count for a lot.

And incase you’re wondering about what happened to Indigenous skeletal remains in the past, here’s an article by Paul Daley in The Guardian. Reading it will let you see why this was such a big deal for me. 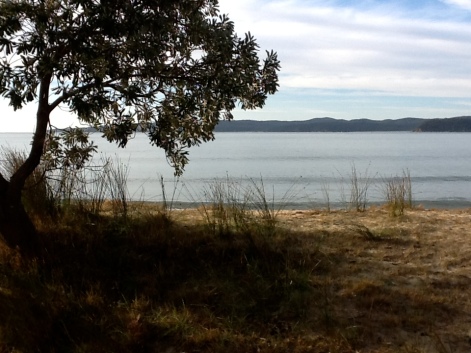 Judging by the photo in the first Eden Magnet article, this looks like the tree beside which the skeletal remains were found. I took this a few years ago at a family re-union we had back on our grandparents camping ground/farm.

Below is the letter I sent to the Australian papers yesterday. I don’t know if it will be printed or not, or if it will help in anyway. But it’s hard to sit at my window looking out over the Irish landscapes of my adopted home doing nothing to help, when the people that I care so deeply about are making such efforts to find their way back to their own country on whose ancestral lands I grew up.

Re: Aboriginal Bones Unearthed On Beachfront

The Eden Magnet newspaper carried an article on 24th June 2015 about Aboriginal bones being uncovered at a camping ground south of Eden, New South Wales. This was once my people’s home place.

Three generations of my ancestors, on my mother’s side, lived out their lives on this same land. From the 1890’s my mothers grandparents ran a sawmill there and until the 1970’s her parents used the land as a mixed farm and caravan park. As a child I used to think of three generations back as a long, long time ago, but it only translates as less than a hundred years.

The Magnet article included a photograph of two men from the Eden Local Aboriginal Land Council (ELALC) painstakingly sifting the soil for clues, artefacts or more bones from their ancestors. The scenery in the background is as familiar to me as the back of my own hand.

I live in Ireland now. The European pull to return to the northern hemisphere where our people originated pre 1850, proved too great. I’m settled here for over thirty years and I feel at peace here.

I still visit Eden and what was once our farm. When I’m there, memories come to meet me of my carefree childhood and of my family. Standing on ‘my Nana’s beach’ listening to the roll of the waves and watching gulls soaring above the sandstone rocks, I feel as if I am a part of this place and that it is part of me.

I now know that my childhood was played out above the remains of the people who were there first, before our family came. I had no awareness from my education that that was the case, no knowledge of the lives they may have lived or how they were evicted from their land or by whom. I don’t know if my ancestors harmed or murdered the original owners of that land or not. Perhaps they were hunted off before my people ‘took up’ the land. Or perhaps not.

The Magnet article reported that the Aboriginal bones found there were pre-European, and so far have not been dated. For me they are physical proof of what I’ve always known, – that the land was, is and always will be Aboriginal land. 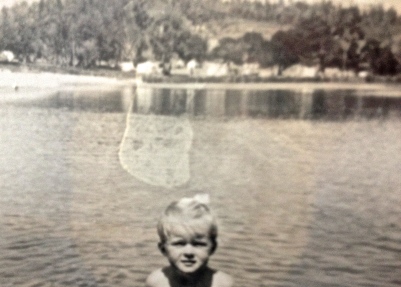 Here’s me cooling off in the creek in the late 1950’s. You can see my grandparent’s camping ground in the background and on the top left corner is where an unknown indigenous man was once buried, sometime before 1788 when Australia became unsettled.

6 thoughts on “No Bones About It”